Global Push Back Against Government Lockdowns Explodes Over Weekend

UPDATE: On Saturday Piers Corbyn, the 73-year-old brother of the former Labour leader was arrested and fined for leading London’s protest. According to his Twitter account he received a ‘£10k fine and ‘held for ten hours’ Summit.news is now reporting, “Despite Corbyn saying he would appeal the fine, a GoFundMe was set up to help him pay the costs was swiftly deleted within 48 hours.“

Much of the global media has, in a coordinated fashion, held the narrative that only a small group of “trouble-makers” aren’t complying with the elongated government lockdowns, but after this weekend’s massive protests across the world, that effort is being drowned out by the voice of the People.  The unprecedented numbers that marched in London, Berlin, Ottawa, Zürich and Ireland chanted in unison over loss of livelihoods, loss of freedom and lack of scientific data to back up mandates on masks, quarantines and vaccines.

Saturday, Trafalgar Square was ground zero for the event in Central London. The corporate media spewed every catch-all, discriminatory Big Pharma-friendly cliché in their arsenal to both rationalize and delegitimize the capacity crowd, like this negative extravaganza in The Independent:

Not to be outdone, The Sun’s headline went further reporting Masking the Truth: Up to 10,000 coronavirus conspiracy theorists who think pandemic is a HOAX – including David Icke – march on London. 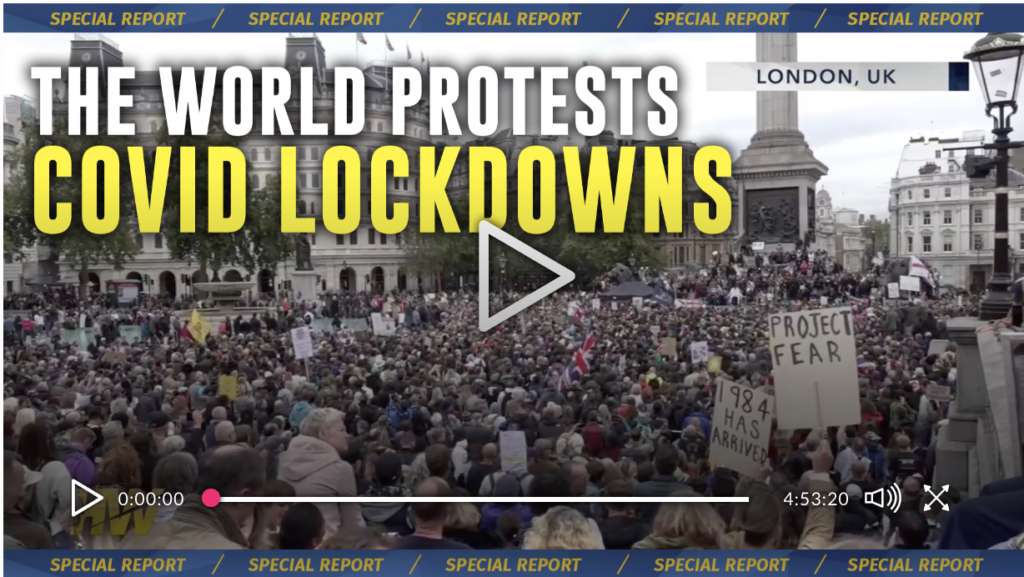 Many luminaries were scheduled to Skype onto a large screen in the middle of the square but rushed city ordinances the night before prohibited the trucks delivering the screens to enter the area. Meanwhile, some reports of the power being cut to the video during the event’s speaker line-up may have prevented many experts’ voices from being heard.

In Berlin, some media estimated 30,000 to 60,000 people, which is a huge turnout, but again, just looking at the video proves an obviously low estimate. Robert F Kennedy Jr. was among the leaders who spoke about the authoritarian response by health officials to the coronavirus. “Governments love pandemics,” said Kennedy Jr., “They love pandemics for the same reason that they love war because it gives them the ability to impose controls on the population that the population would otherwise never accept.”

He also discussed how poorly tested 5G technology is being rushed out globally.

“They haven’t done a good job protecting public health. But they’ve done a very good job of using the quarantine to bring 5G into all of our communities.”

Still, countries continue to push a similar agenda:  Forced masking of children. Selective enforcement of social distancing. Near hysterical reactions to any potential therapy that isn’t a vaccine. All of this signaling to the public that something is not right.

Way before Covid-19, the holes exposed in vaccine safety science have become legion. Big Pharma was being called out more and more. There were large and raucous protests in state legislatures, as legal protections for vaccine makers and other WTF facets of the pharmaceutical-medical industrial complex became transparent, showcasing that the regulatory agencies tasked to protect the people have long been asleep at the wheel.

Paradoxically, leaders like Boris Johnson chose to describe those with questions surrounding vaccine safety as “nuts”. Speaking to nurses at a London GP surgery last month, the Prime Minister said: “There’s all these anti-vaxxers now. “They are nuts, they are nuts.”

Yet, those same “nuts” are almost the majority of the public in new polls, showing only 42% of Americans would take the Covid-19 vaccination when it comes out. The public is traumatized because of the government’s ham-fisted Covid lockdowns, especially when the short lockdown turned into a slow-drip of government sponsored captivity. Now those early supporters of lockdown share a feeling of all-out assault on many of their liberties.

In the end, what the trusting public received was a slap in the face. Governments, moving in coordinated action, refusing to lift ‘Covid restrictions’ until everyone receives their Covid-vaccine. A vaccine using questionable medical technology never tried before, against a virus notoriously difficult to create a vaccine against, that is being rushed through its safety testing.

The Covid vaccine charade is now so flimsy that much of the corporate media and leading medical figures who, before Covid-19, revelled with glee calling anyone who questioned vaccine safety an ‘anti-vaxxer’ are now leading ‘anti-vax’ voices against the shot.

In Russia, defection and vocal opposition from their leading medical figures is plaguing what was only a week ago, positive media coverage of their vaccine. Vladamir Putin took a victory lap too soon, it seems, when he claimed Russia had leapfrogged to head of the global vaccine arms race, the first to register a coronavirus vaccine.

With so many countries rising up against the Covid lockdown narrative, challenging their government and health officials, the world is now looking to America for their “Trafalgar Square” moment, and hoping it comes soon.

Jefferey Jaxen Jefferey Jaxen is a researcher, investigative journalist, writer and voice for health freedom on the front lines of society's shift towards higher consciousness. Jefferey is constantly working behind the scenes to spotlight the untold, censored...
Natural Health Medical Health News Politics
Sign In Register